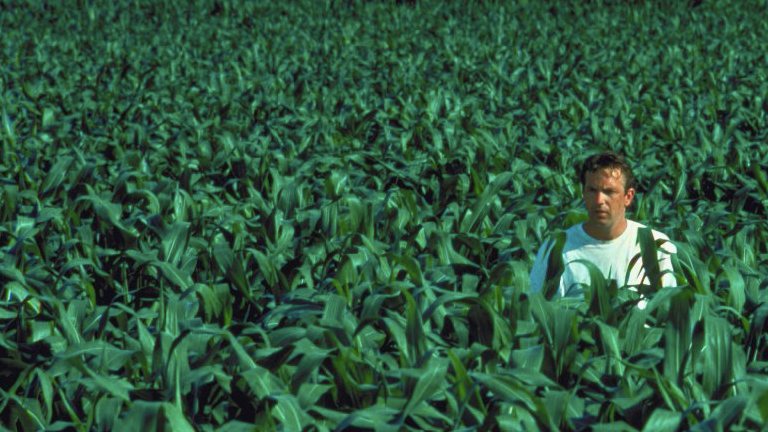 I'm doing a talk for Podcamp Halifax about "Micro-Fame" and funnily enough while I was working on it a tweet I posted went viral:

Hey remember that "build it and they will come" is not from a business guru, but a guy who is hallucinating ghost baseball players.

"If You Build It, They Will Come" is an adaptation of a line from the early-90s Kevin Costner movie "Field of Dreams". Costner's character Ray Kinsella follows a ghostly voice telling him "if you build it, he will come" and turns his corn field into a baseball diamond, summoning Shoeless Joe, the 1919 White Sox, and the ghost of his father.

I recently re-watched the movie, and I can see why the phrase became popular: it makes dream sense. Ray is following a dream which is wrapped up in his midlife crisis, his relationship to his father, and his love of baseball. He is driven to an end he can't see by forces he cannot understand - in many ways, it's a happier, baseball-themed version of Close Encounters of the Third Kind. Many people who follow their dreams to build and sell something of their own have that same sense of mission, and just like in the movie a lot of their friends and family think they're crazy.

The last shot of the film is of a huge lineup of cars outside the haunted field a horde of public visitors attracted by the Magic of Baseball. I think it's this final image that got stock in peoples' minds: A lone slightly crazed maverick builds something awesome and - boom - there's a traffic jam of people trying to get in.

When the first dot com boom hit in the mid 1990s this movie was still in recent memory, and for a brief moment in the early land-grab phase, when simply having a web page was a big deal, the idea of "build it and they will come" seemed like it might be true.

But while that moment passed quickly, the phrase has continued to be a motto for business and technology gurus, even twenty years on.

The thing is, the phrase is wrong. Very wrong. So wrong, in fact, that it's dangerous.

James' Earl Jones' character fleshes out the idea in his stirring final speech: "People will come ... not even sure why they're doing it. ... As innocent as children. ... They'll pass over the money without even thinking about it.".

That's magical thinking - and it's not how the real world works.

The truth is that, while building something and launching it into the world is a great achievement, it's only the first step. Great, now the product / website / app is out in the world - nobody will come because nobody knows that it exists. Now you have to market and promote and hustle your product. You have to refine it and release updates and new editions. You have to write blog posts, do talks, give interviews about it. You need to provide support for the people who have come - support that's good enough to make them tell all their friends about your product. You need to make other related products that tie in to the first one and enhance it.

All of this takes at least as much work as building the product in the first place, often much more. Finally, after all of that extra work and hustle, they might come. There are no guarantees, but the odds are much better when you add the hustle.

Elsewhere in the movie, the voice whispers to Ray, "go the distance" - now that is a great message for makers and hustlers. Keep going, no matter how far you have to go.

So, "go the distance" but remember, this isn't Heaven - it's Iowa.

Previous:
#deployaday, My Big Hairy Plan for 2015
Jan 11, 2015 14:34
Next:
The Best Thing I Ever Did To Promote My App
Jan 15, 2015 20:08
Share
Twitter Facebook
Other Blog Posts
My Expanded Twitter Thread about BurgerWeek 2021 This Is Nowhere: The Server Side Building a React Native App Without Tears - Part 3 Building a React Native App Without Tears - Part 2 Building a React Native App Without Tears (Mostly) This Is Nowhere: The Memento Edition This Is Nowhere: Aspects of Accessibility Presentations About NowHere This Is Nowhere: Head-First Into React Native This Is Nowhere: Bloomsday Halifax This Is Nowhere: Why an HTML/JavaScript Single-Page App With GPS Is A Bad Idea This Is Nowhere: GPS and Wayfinding and More UX This Is Nowhere: The Single-Button UX This Is Nowhere: Don’t Just Stand There! This Is Nowhere: Finding My Duck Finding Burgers Fast: My DIY Halifax Burger Week Site "This is Nowhere" at PodCamp Halifax 2018 The Diary Diaries: Fixing Remembary's Facebook Connection Special Leap Day Edition of "Some Weird Things About Time" What's Up With Remembary Can't get pg_dump To Work Now That Heroku Has Upgraded Postgresql to 9.4? The Best Thing I Ever Did To Promote My App If You Build It, They WON'T Come #deployaday, My Big Hairy Plan for 2015 Extracting Plain Text from an NSAttributedString My Year of "Hits" Part 2: Remembary Rolling My Year of "Hits" Part 1: Remembary Rises (and Stumbles) Handy Little Test Method to Check for Translations in Rails Apps My Suddenly Slow-Waking MacBook Air Indie App PR: Keeping Control of Your Tone A Quick Note on 'clone' in Rails 3.2 My eBook Apps 2: iOS, JavaScript, and Ruby My eBook Apps 1: Introduction Quick Tip: No Sound on Mountain Lion My Upcoming Talk at PodcampHFX 2012: My Year of "Hits" starshipsstarthere.ca: Building at the Speed of Funny Screencast Tips Remembary's Cool New Picture Support Indie App PR 2: Keeping On Top Of User Feedback Indie App PR 1: How to Handle an App Disaster Giles Bowkett Diary Project 2 Remembary Video Congratulations! Welcome to Your Nightmare! How My iPad App Remembary Took Off Why You Should Have an App in the App Store (Even If You Probably Won't Make Any Money) PodCampHFX Remembary Presentation - Part 3 How I Used MailChimp Autoresponders to Promote Remembary PodCampHFX Remembary Presentation Part 2 PodCampHFX Remembary Presentation Part 1 Why AdWords Ads Don't Work for iPad Apps Remembary is Sponsoring PodcampHFX Why Can't I Resize my Views in Interface Builder? Momento and Remembary Concerning Remembary iPad-Friendly eBooks of Gracian's Art of Worldly Wisdom Project Report: PTOS2 A Quick Note on Encryption We're all LUsers Thoughts on HAML Friday Afternoon Hack - Getting Beyond the Basics Halifax Friday Hack and Back to Basics Quote from Wil Shipley FutureRuby Make Web Not War Busy Week I: Toronto Ruby Job Fair Employment.nil - the Toronto Ruby Job Fair Code Count: Ruby on Rails vs. C#/ASP.NET A Brief Note on Twitter The Hub Halifax and Mobile Tech for Social Change Deep Thoughts on Microsoft From The Accordion Guy The Two Kinds of Defensive Programming Presentation - Fixing Careerious: From C#/.NET to Ruby on Rails Enterprise! Presenting at Ruby on Rails Project Night - May 7th New Name and New Look for Careerious/Clearfit FutureRuby and More From Unspace Health Tips for Programmers This tables meme won't die Careerious - Ruby and Rails vs. C#/.NET Yeah I Use Tables For Layout, So Sue Me The Different Kinds of Done Giles Bowkett's RubyFringe presentation OfficeTime: Great Time-Tracking App for OS X Back With A New Look Non-DRY Feed torontorb Keeping Your Sanity With The Command Design Pattern shindigital Is All Grown Up! (according to the spambots) Startup Stars? I'm so bored! The Magic Words for RMagick Jennifer from Operations You see? Naming is HARD Business Software as Process Documentation Deployment note: 'execve failed' Steve Jobs on Market Research Why Canada Is Better for Entrepreneurs "Program first and blog second" Toronto Tech Collage The MacBook Air Is A Roadster RubyFringe! Quote of the Week: Steve Yegge Starting Up: Cards Great design tool: browsershots.org Starting Up: The Logo Quotes Of The Day: Hedge Fund Interview TSOT Ruby / Rails Presentation Night - Part 1 Moneyworks: Accounting Software for Canadians on OS X Starting Up: The Name Nice logo, but why is your site so bland? Welcome to shindigital.com