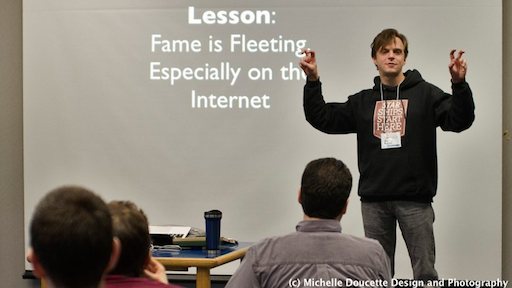 This is part 2 of a series of posts of my PodCamp Halifax 2012 presentation. Part 1 is here and you should read it first if you haven't already.

So after the all the joy and the panic, things finally calmed down a bit. Sales were gradually getting a little better, from one or two copies a week to several a day. There was some more attention from app review blogs. The biggest deal, though, was when I submitted the next update to to the App Store, I got an email from them asking for extra promotional graphics! The app had been noticed by the App Store staff!

The most important place for an app to get sales is in the App Store itself. In Canada, Remembary stayed in "What's Hot" in the iPad Lifestyle section for several months. That sounds great, but it's the back corner of a single category, and only in Canada, so it wasn't worth a lot of sales. In late May, Remembary was featured in a special "Graduation Day" promotion in the US store - it was on the coveted front page of the US app store, and even though it was just a small square that you had to scroll to, it was still worth several hundred dollars over that week.

Famous on the Web, Too

When I first submitted Remembary to the App Store, I had no idea how well it would do, and how much money I might make. People don't tend to talk about how their app is doing if it's doing poorly or just getting by. Instead, the web is full of stories about the few developers who make it big. In many ways, this is like profiling people who have won the lottery, or musicians who have sold millions of records. It's certainly something that happens, but it's not the most common situation.

Now that Remembary had received good press and had even been featured in the App Store, I had some experience in real-world app revenues. After almost a year, it had made roughly $2000. So I decided to share this with the world - to show how much a "moderately successful" app can make. 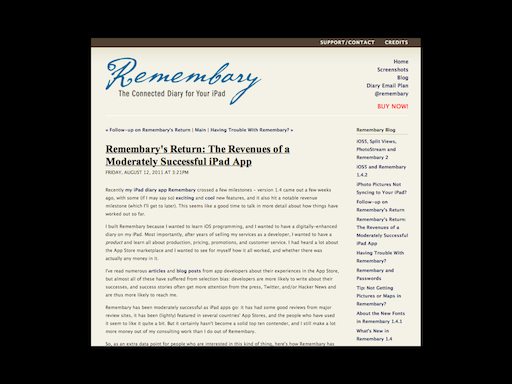 The post, Remembary's Return: The Revenues of a Moderately Successful iPad App turned out to be a lesson in web fame on its own: it hit the coveted front page of Hacker News, fostering an interesting discussion and over 5000 site visits - but not a single extra sale.

Still, the attention did wonders for the site's Google ranking. Having an article on the front page of Hacker News is worth some serious bragging points as well.

I had been playing with the price of the app a little bit, going down as far as 99 cents sometimes. There's an interesting psychology to pricing your own products: it's very easy to make your app cheaper or even free, but it's emotionally quite difficult to raise the price. You think of all the sales you might be losing, you see how much of the competition is much cheaper or free (even if it's not very good), and then you imagine all the complaints from people who are upset at having paid too much.

Then I realized that this is the App Store, and I'm talking about a product that's replaced a $50/year journaling habit with a single payment of less than the price of a coffee. So I finally got my nerve up and raised the price from $1.99 to $2.99, then to $3.99. My sales numbers didn't end up changing at all, but instead I made more money.

One thing I did notice about having a more expensive app is that the quality of the comments improves. If an app is free or cheap, people won't take the time to figure it out and will often leave a knee-jerk single-star review if there's something they don't understand. Having a 'premium-priced' product (even if that's still less than $5) means that people are more invested in the product.

One of the nice things about having a diary app is that the people who use it tend to be thoughtful and writerly. Most of the feedback in the app store has been highly positive and often quite well written. This does depend on the country in question, though. I only have two written reviews in the Australian App Store, but they're gushing and lovely: 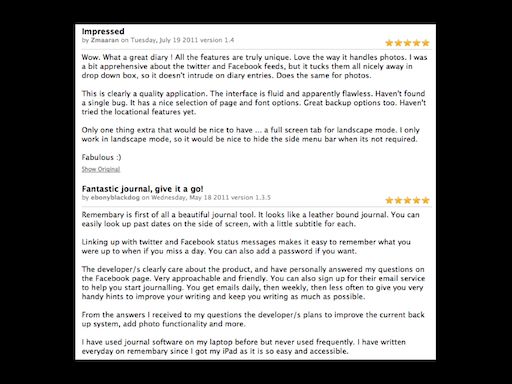 Not so much in the Russian App Store: 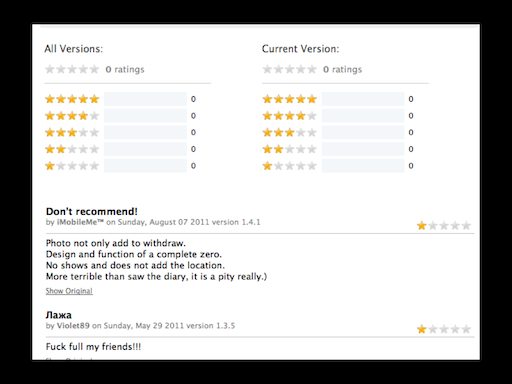 Lesson: Australians are Nicer Than Russians

(Small disclaimer: the Russians I've gotten to know personally have been very friendly and generous and hospitable - but I think Russians tend to have a rather tough public face.)

Another side effect of the App Store's global reach is that it is in many countries which don't have a lot of iOS devices, or at least not many iPads. Remembary got the attention of the "Worldwide" App Store team, who decide what gets featured in over a hundred 'smaller' markets that aren't significant enough to have their own dedicated App Stores. This meant that I showed up in "What's Hot" everywhere from Guatemala to Indonesia - and I only have to sell one or two copies in one of these countries to rocket up to the top of their iPad Lifestyle charts. It still doesn't make me a whole lot of money, but it's cool to be charting in Niger, Iceland, The British Virgin Islands, or Saudi Arabia: 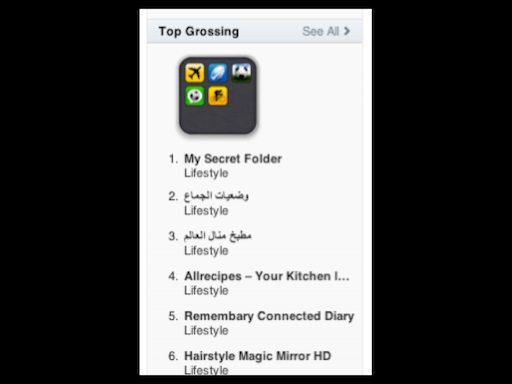 Lesson: It only takes a few sales to rock the charts in smaller markets

So from an uncertain start, Remembary got on its feet in 2011 and started making reliable if not spectacular progress. It got good reviews, small features in the App Store, some media attention, and regular patches and updates. When the big Christmas/New Year's week came in 2011, I didn't spend any money on advertising like I had in 2010. In fact, I didn't do anything to promote the app. Here's what happened: 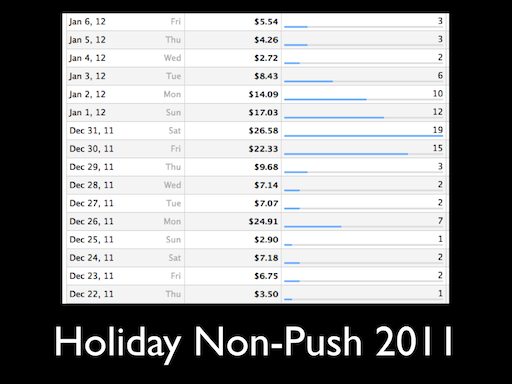 One of my best weeks ever, and certainly the best without any external promotion. So my hunch that the holidays are a big time for diaries came true. Of course, a "good week" only means that I made about $130 - but that's without having to do any extra work, and it's certainly better than only making $10 while spending thousands on AdWords, like I did in 2010.

Lesson: It can take a year or more for an app to find itself.

It's now been several years, and Remembary is still rolling along. It's had a number of big updates, and I'm working on a major iOS7 overhaul for spring 2014. It's now made a total of about $8000. I don't expect I'll ever be able to retire on this kind of revenue, but it's a passion project for me. I approach Remembary like writers and musicians approach their work - as a goal in itself, not necessarily a money-maker.

That said, I've learned a whole lot, and have found other paying client work from having this app in my portfolio.

Previous:
My Year of "Hits" Part 1: Remembary Rises (and Stumbles)
Feb 04, 2014 01:25
Next:
Extracting Plain Text from an NSAttributedString
Jun 19, 2014 20:01
Share
Twitter Facebook
Other Blog Posts
My Expanded Twitter Thread about BurgerWeek 2021 This Is Nowhere: The Server Side Building a React Native App Without Tears - Part 3 Building a React Native App Without Tears - Part 2 Building a React Native App Without Tears (Mostly) This Is Nowhere: The Memento Edition This Is Nowhere: Aspects of Accessibility Presentations About NowHere This Is Nowhere: Head-First Into React Native This Is Nowhere: Bloomsday Halifax This Is Nowhere: Why an HTML/JavaScript Single-Page App With GPS Is A Bad Idea This Is Nowhere: GPS and Wayfinding and More UX This Is Nowhere: The Single-Button UX This Is Nowhere: Don’t Just Stand There! This Is Nowhere: Finding My Duck Finding Burgers Fast: My DIY Halifax Burger Week Site "This is Nowhere" at PodCamp Halifax 2018 The Diary Diaries: Fixing Remembary's Facebook Connection Special Leap Day Edition of "Some Weird Things About Time" What's Up With Remembary Can't get pg_dump To Work Now That Heroku Has Upgraded Postgresql to 9.4? The Best Thing I Ever Did To Promote My App If You Build It, They WON'T Come #deployaday, My Big Hairy Plan for 2015 Extracting Plain Text from an NSAttributedString My Year of "Hits" Part 2: Remembary Rolling My Year of "Hits" Part 1: Remembary Rises (and Stumbles) Handy Little Test Method to Check for Translations in Rails Apps My Suddenly Slow-Waking MacBook Air Indie App PR: Keeping Control of Your Tone A Quick Note on 'clone' in Rails 3.2 My eBook Apps 2: iOS, JavaScript, and Ruby My eBook Apps 1: Introduction Quick Tip: No Sound on Mountain Lion My Upcoming Talk at PodcampHFX 2012: My Year of "Hits" starshipsstarthere.ca: Building at the Speed of Funny Screencast Tips Remembary's Cool New Picture Support Indie App PR 2: Keeping On Top Of User Feedback Indie App PR 1: How to Handle an App Disaster Giles Bowkett Diary Project 2 Remembary Video Congratulations! Welcome to Your Nightmare! How My iPad App Remembary Took Off Why You Should Have an App in the App Store (Even If You Probably Won't Make Any Money) PodCampHFX Remembary Presentation - Part 3 How I Used MailChimp Autoresponders to Promote Remembary PodCampHFX Remembary Presentation Part 2 PodCampHFX Remembary Presentation Part 1 Why AdWords Ads Don't Work for iPad Apps Remembary is Sponsoring PodcampHFX Why Can't I Resize my Views in Interface Builder? Momento and Remembary Concerning Remembary iPad-Friendly eBooks of Gracian's Art of Worldly Wisdom Project Report: PTOS2 A Quick Note on Encryption We're all LUsers Thoughts on HAML Friday Afternoon Hack - Getting Beyond the Basics Halifax Friday Hack and Back to Basics Quote from Wil Shipley FutureRuby Make Web Not War Busy Week I: Toronto Ruby Job Fair Employment.nil - the Toronto Ruby Job Fair Code Count: Ruby on Rails vs. C#/ASP.NET A Brief Note on Twitter The Hub Halifax and Mobile Tech for Social Change Deep Thoughts on Microsoft From The Accordion Guy The Two Kinds of Defensive Programming Presentation - Fixing Careerious: From C#/.NET to Ruby on Rails Enterprise! Presenting at Ruby on Rails Project Night - May 7th New Name and New Look for Careerious/Clearfit FutureRuby and More From Unspace Health Tips for Programmers This tables meme won't die Careerious - Ruby and Rails vs. C#/.NET Yeah I Use Tables For Layout, So Sue Me The Different Kinds of Done Giles Bowkett's RubyFringe presentation OfficeTime: Great Time-Tracking App for OS X Back With A New Look Non-DRY Feed torontorb Keeping Your Sanity With The Command Design Pattern shindigital Is All Grown Up! (according to the spambots) Startup Stars? I'm so bored! The Magic Words for RMagick Jennifer from Operations You see? Naming is HARD Business Software as Process Documentation Deployment note: 'execve failed' Steve Jobs on Market Research Why Canada Is Better for Entrepreneurs "Program first and blog second" Toronto Tech Collage The MacBook Air Is A Roadster RubyFringe! Quote of the Week: Steve Yegge Starting Up: Cards Great design tool: browsershots.org Starting Up: The Logo Quotes Of The Day: Hedge Fund Interview TSOT Ruby / Rails Presentation Night - Part 1 Moneyworks: Accounting Software for Canadians on OS X Starting Up: The Name Nice logo, but why is your site so bland? Welcome to shindigital.com