Several months ago, as a promotion for my iPad diary app Remembary, I wrote some fun Mark Leyner-esque hyper-real fake diary entries for the inimitable Giles Bowkett. Yesterday, Unspace brought Giles to Toronto as part of their Technologic series and I was asked to read out the fake diary entries as an opening act and introduction to Giles himself. The entries from November already felt a little dated, so I wrote some new entries, based on Giles' recent Tweets (with one gag recycled from the originals). Here they are:

By the way, the screenshots are a sneak preview of Remembary 1.4 (and yes those are "Pictures" and "Map" buttons).

Did some programming today, then worked on my audition monologue. It's really weird to go from full-on actor brain to full-on programmer brain. Decided to make some self-hypnosis MP3s to help shift gears. Set up Hypnosis MP3s and ran through them in the afternoon - great stuff! Now I'm a master at Vim *and* Emacs.

Went to acting class and Megan Fox was there - since she got kicked out of the next Transformers movie, she's back to finding a good monologue and head-shot and trying out for commercials and community theatre. Told her I might have a gig for her. Looks like the Rapture came and went, and I spent it at a burrito place. I don't know if I was called up, since I blocked Jesus on Twitter a while back for his holier-than-thou attitude.

Jesus found another Twitter account, but then called me an asshat for not joining him yesterday. BLOCKED. Megan Fox came by today, to help me concentrate on my coding. Every 8 minutes or so, I'm having her jump into my office with an In-n-Out burger in one hand and a .357 magnum in the other. Really helped me stay off Twitter and Hacker News and focus on work. 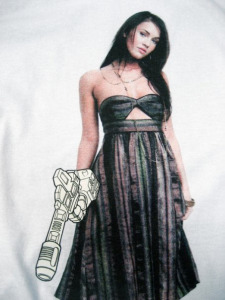 (If you haven't seen Giles' "Handcuffs" video, that last part might not have made a lot of sense. Image from kwills.com, by the way.) Tomorrow I find out if I can eat a whole pound of spinach.

Thought of a way to help my out-of-work actor friends *and* cut back on all the headhunter spam I've been getting: I'll teach the actors how to act and speak like programmers, then they can keep the recruiters busy. They might even be able to get jobs - sure beats waiting tables. Making some hypnosis MP3s for them. First lesson is how to troll online effectively. Keyword: "Asshat". Second lesson: writing obscure deprecation messages for your gem libraries. Reminding myself that i need to email that girl who lives in echo park. remember! Turns out eating a whole pound of spinach at once is hard to do. That said, my Vegan diet is really working out now: My telekinetic powers are increasing and my bass technique is totally kicking ass.

My actor friends love the hypnosis MP3s. They're making such great progress - one of them totally killed it with a spot-one rendition of "Why the hell didn't they put HAML into Rails 3.1?" I'm so proud. One of them is interviewing at Hashrocket! Making a new hypnosis MP3 for them: mastering passive-aggressive tone in commit messages. Hey just found out one of them got a job at GitHub! Reminding myself that i need to email that girl who lives in echo park. remember!

Asked Megan Fox if she can help with the distractions again - if I can stay off Twitter long enough to build my new custom annoyance-filtering and mass-blocking client, it'll make my life and the world a better place. She said she had some auditions next week - one for a littering Public Service Announcement, and another one for a Pentecostal dinner-theatre show - but if those didn't work out, she'd totally be up for it

Jesus is calling me on my phone now - so just turned everything off now. No Skype, no phone, no Twitter, no IRC.

It's actually quite relaxing.

Jesus is now sending me emails. I love the guy, but enough is enough. Redirected them all to the spam folder.

More hypnosis MP3s today: now I know how to fly a Bell 212 helicopter. I also know Drunken Boxing - too bad I don't drink.

Converted an old car windshield, a Mattel Pixelvision camera, and an Arduino into a live transparent touchscreen DJ device that integrates directly with Archaeopteryx. It only makes dubstep with quotes from the movie Dune.

(That last reference was fortuitous: Giles' talk ended up being about dealing with fear in your life, like the Bene Gesserit Litany Against Fear.)

Previous:
Remembary Video
Mar 19, 2011 15:31
Next:
Indie App PR 1: How to Handle an App Disaster
Jun 20, 2011 12:46
Share
Twitter Facebook
Other Blog Posts
My Expanded Twitter Thread about BurgerWeek 2021 This Is Nowhere: The Server Side Building a React Native App Without Tears - Part 3 Building a React Native App Without Tears - Part 2 Building a React Native App Without Tears (Mostly) This Is Nowhere: The Memento Edition This Is Nowhere: Aspects of Accessibility Presentations About NowHere This Is Nowhere: Head-First Into React Native This Is Nowhere: Bloomsday Halifax This Is Nowhere: Why an HTML/JavaScript Single-Page App With GPS Is A Bad Idea This Is Nowhere: GPS and Wayfinding and More UX This Is Nowhere: The Single-Button UX This Is Nowhere: Don’t Just Stand There! This Is Nowhere: Finding My Duck Finding Burgers Fast: My DIY Halifax Burger Week Site "This is Nowhere" at PodCamp Halifax 2018 The Diary Diaries: Fixing Remembary's Facebook Connection Special Leap Day Edition of "Some Weird Things About Time" What's Up With Remembary Can't get pg_dump To Work Now That Heroku Has Upgraded Postgresql to 9.4? The Best Thing I Ever Did To Promote My App If You Build It, They WON'T Come #deployaday, My Big Hairy Plan for 2015 Extracting Plain Text from an NSAttributedString My Year of "Hits" Part 2: Remembary Rolling My Year of "Hits" Part 1: Remembary Rises (and Stumbles) Handy Little Test Method to Check for Translations in Rails Apps My Suddenly Slow-Waking MacBook Air Indie App PR: Keeping Control of Your Tone A Quick Note on 'clone' in Rails 3.2 My eBook Apps 2: iOS, JavaScript, and Ruby My eBook Apps 1: Introduction Quick Tip: No Sound on Mountain Lion My Upcoming Talk at PodcampHFX 2012: My Year of "Hits" starshipsstarthere.ca: Building at the Speed of Funny Screencast Tips Remembary's Cool New Picture Support Indie App PR 2: Keeping On Top Of User Feedback Indie App PR 1: How to Handle an App Disaster Giles Bowkett Diary Project 2 Remembary Video Congratulations! Welcome to Your Nightmare! How My iPad App Remembary Took Off Why You Should Have an App in the App Store (Even If You Probably Won't Make Any Money) PodCampHFX Remembary Presentation - Part 3 How I Used MailChimp Autoresponders to Promote Remembary PodCampHFX Remembary Presentation Part 2 PodCampHFX Remembary Presentation Part 1 Why AdWords Ads Don't Work for iPad Apps Remembary is Sponsoring PodcampHFX Why Can't I Resize my Views in Interface Builder? Momento and Remembary Concerning Remembary iPad-Friendly eBooks of Gracian's Art of Worldly Wisdom Project Report: PTOS2 A Quick Note on Encryption We're all LUsers Thoughts on HAML Friday Afternoon Hack - Getting Beyond the Basics Halifax Friday Hack and Back to Basics Quote from Wil Shipley FutureRuby Make Web Not War Busy Week I: Toronto Ruby Job Fair Employment.nil - the Toronto Ruby Job Fair Code Count: Ruby on Rails vs. C#/ASP.NET A Brief Note on Twitter The Hub Halifax and Mobile Tech for Social Change Deep Thoughts on Microsoft From The Accordion Guy The Two Kinds of Defensive Programming Presentation - Fixing Careerious: From C#/.NET to Ruby on Rails Enterprise! Presenting at Ruby on Rails Project Night - May 7th New Name and New Look for Careerious/Clearfit FutureRuby and More From Unspace Health Tips for Programmers This tables meme won't die Careerious - Ruby and Rails vs. C#/.NET Yeah I Use Tables For Layout, So Sue Me The Different Kinds of Done Giles Bowkett's RubyFringe presentation OfficeTime: Great Time-Tracking App for OS X Back With A New Look Non-DRY Feed torontorb Keeping Your Sanity With The Command Design Pattern shindigital Is All Grown Up! (according to the spambots) Startup Stars? I'm so bored! The Magic Words for RMagick Jennifer from Operations You see? Naming is HARD Business Software as Process Documentation Deployment note: 'execve failed' Steve Jobs on Market Research Why Canada Is Better for Entrepreneurs "Program first and blog second" Toronto Tech Collage The MacBook Air Is A Roadster RubyFringe! Quote of the Week: Steve Yegge Starting Up: Cards Great design tool: browsershots.org Starting Up: The Logo Quotes Of The Day: Hedge Fund Interview TSOT Ruby / Rails Presentation Night - Part 1 Moneyworks: Accounting Software for Canadians on OS X Starting Up: The Name Nice logo, but why is your site so bland? Welcome to shindigital.com