I'll be writing more technical details about building the app, and the equally new and challenging job of promoting Shindig's first consumer product. For now, here's a blog post cross-posted to the Remembary.com blog. I've enabled sharing and comments on that blog, so if you want to share this or comment on it, you can do so there.)

The iPad is a new kind of device. While computers have been "personal" since the 1970s, the iPad is perhaps the first "private" computer - maybe even the first "intimate" computer. Smartphones and devices like the iPod Touch are also personal, but their small screens, always-on networking and portability make them more about connections and quick bursts of activity. While smartphones encourage quick hits, the iPad encourages longer-form, even contemplative activities. It is one of the first computer devices that encourages users to slow down rather than speed up. Regular computers require leaning forward. People watch TV while leaning back. The iPad encourages you to lean back - but to bring the device with you. 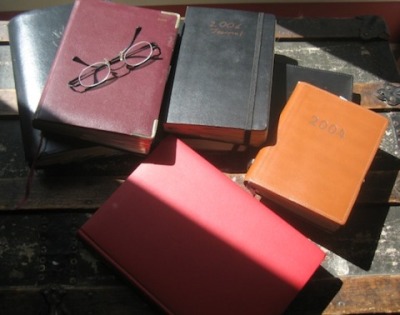 There are few things more private and intimate than a diary. As soon as I heard about the iPad, I thought it would make a great device for a diary. I've kept a personal journal since late 2003, and have built up a nice bookshelf of handsome hardcover volumes filled with my messy handwriting. When I'm in a reflective mood, I'll often pull them out and see what my life was like in the past. Sometimes I'll pick a specific date and see what I did on that day every year. Sometimes I'll just open a volume up at random and be transported back to an unexpected, perhaps forgotten, context of friends and activities.

When the iPad was announced, I immediately thought that it would be a great device for a diary. It's not only great for entering data, but also excellent for browsing the past entries. Now, along with all of my music and pictures and books, the iPad can hold all of my diaries - I can access my own past without having to carry around a whole lot of heavy books.

But the iPad has another edge on physical, handwritten books: it's connected to the internet, and it knows how to handle dates and times. Like many people, more and more of my life happens on-line - not just my work, but my social world and my public-facing thoughts through Twitter and Facebook and my various blogs. These services reflect different aspects of one's life, but they tend to focus on the present moment, as a flow of data in the continuously-moving Now - as anyone can tell who has tried to dig up a tweet from more than a few days ago. 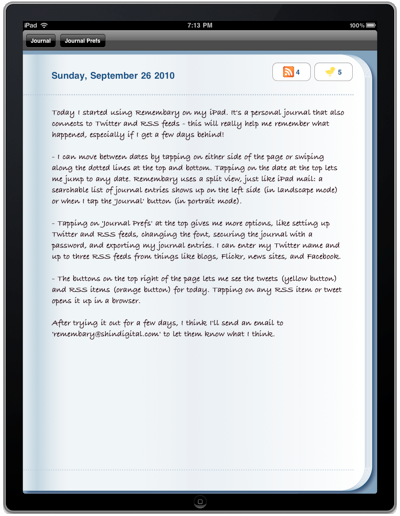 Many interesting products are a combination of several existing things in a new way that makes them more than the sum of their parts. Remembary is a personal journal and an RSS / Twitter reader. Both of these things are easy to understand (and relatively easy to build) but work together to make something remarkably useful.

One of my biggest problems with keeping a written diary was that my life would often get very busy and I wouldn't have time to write, or I'd go on a trip and forget my diary at home. Then I would have several days (or even weeks) of empty pages to fill in. Some days I have trouble remembering exactly what happened this morning, so trying to recall what I did last Tuesday can be extremely difficult. Missing days in a diary often feels like those days are missing out of my life.

Remembary really helps on this front: a diary page may be blank, but in the top right corner are two little buttons that, when tapped, bring up my Twitter and RSS activity for that day - quick jogs to my memory to help fill in my day and keep it from vanishing into the past.


When Steve Jobs wrapped up the announcement of the iPad with the comment that Apple had always been at the intersection of Technology and the Liberal Arts, I felt like he was talking to me. I've spent fifteen years as a software developer and technologist, but I have two degrees in English Literature - one from Oberlin "We Put The Liberal In The Liberal Arts" College. Remembary is my little lemonade stand at that intersection. I've got a little sign saying "$2.99 - Cheap!" Consider picking it up for yourself.
Previous:
iPad-Friendly eBooks of Gracian's Art of Worldly Wisdom
Oct 13, 2010 09:07
Next:
Momento and Remembary
Dec 03, 2010 10:45
Share
Twitter Facebook
Other Blog Posts
My Expanded Twitter Thread about BurgerWeek 2021 This Is Nowhere: The Server Side Building a React Native App Without Tears - Part 3 Building a React Native App Without Tears - Part 2 Building a React Native App Without Tears (Mostly) This Is Nowhere: The Memento Edition This Is Nowhere: Aspects of Accessibility Presentations About NowHere This Is Nowhere: Head-First Into React Native This Is Nowhere: Bloomsday Halifax This Is Nowhere: Why an HTML/JavaScript Single-Page App With GPS Is A Bad Idea This Is Nowhere: GPS and Wayfinding and More UX This Is Nowhere: The Single-Button UX This Is Nowhere: Don’t Just Stand There! This Is Nowhere: Finding My Duck Finding Burgers Fast: My DIY Halifax Burger Week Site "This is Nowhere" at PodCamp Halifax 2018 The Diary Diaries: Fixing Remembary's Facebook Connection Special Leap Day Edition of "Some Weird Things About Time" What's Up With Remembary Can't get pg_dump To Work Now That Heroku Has Upgraded Postgresql to 9.4? The Best Thing I Ever Did To Promote My App If You Build It, They WON'T Come #deployaday, My Big Hairy Plan for 2015 Extracting Plain Text from an NSAttributedString My Year of "Hits" Part 2: Remembary Rolling My Year of "Hits" Part 1: Remembary Rises (and Stumbles) Handy Little Test Method to Check for Translations in Rails Apps My Suddenly Slow-Waking MacBook Air Indie App PR: Keeping Control of Your Tone A Quick Note on 'clone' in Rails 3.2 My eBook Apps 2: iOS, JavaScript, and Ruby My eBook Apps 1: Introduction Quick Tip: No Sound on Mountain Lion My Upcoming Talk at PodcampHFX 2012: My Year of "Hits" starshipsstarthere.ca: Building at the Speed of Funny Screencast Tips Remembary's Cool New Picture Support Indie App PR 2: Keeping On Top Of User Feedback Indie App PR 1: How to Handle an App Disaster Giles Bowkett Diary Project 2 Remembary Video Congratulations! Welcome to Your Nightmare! How My iPad App Remembary Took Off Why You Should Have an App in the App Store (Even If You Probably Won't Make Any Money) PodCampHFX Remembary Presentation - Part 3 How I Used MailChimp Autoresponders to Promote Remembary PodCampHFX Remembary Presentation Part 2 PodCampHFX Remembary Presentation Part 1 Why AdWords Ads Don't Work for iPad Apps Remembary is Sponsoring PodcampHFX Why Can't I Resize my Views in Interface Builder? Momento and Remembary Concerning Remembary iPad-Friendly eBooks of Gracian's Art of Worldly Wisdom Project Report: PTOS2 A Quick Note on Encryption We're all LUsers Thoughts on HAML Friday Afternoon Hack - Getting Beyond the Basics Halifax Friday Hack and Back to Basics Quote from Wil Shipley FutureRuby Make Web Not War Busy Week I: Toronto Ruby Job Fair Employment.nil - the Toronto Ruby Job Fair Code Count: Ruby on Rails vs. C#/ASP.NET A Brief Note on Twitter The Hub Halifax and Mobile Tech for Social Change Deep Thoughts on Microsoft From The Accordion Guy The Two Kinds of Defensive Programming Presentation - Fixing Careerious: From C#/.NET to Ruby on Rails Enterprise! Presenting at Ruby on Rails Project Night - May 7th New Name and New Look for Careerious/Clearfit FutureRuby and More From Unspace Health Tips for Programmers This tables meme won't die Careerious - Ruby and Rails vs. C#/.NET Yeah I Use Tables For Layout, So Sue Me The Different Kinds of Done Giles Bowkett's RubyFringe presentation OfficeTime: Great Time-Tracking App for OS X Back With A New Look Non-DRY Feed torontorb Keeping Your Sanity With The Command Design Pattern shindigital Is All Grown Up! (according to the spambots) Startup Stars? I'm so bored! The Magic Words for RMagick Jennifer from Operations You see? Naming is HARD Business Software as Process Documentation Deployment note: 'execve failed' Steve Jobs on Market Research Why Canada Is Better for Entrepreneurs "Program first and blog second" Toronto Tech Collage The MacBook Air Is A Roadster RubyFringe! Quote of the Week: Steve Yegge Starting Up: Cards Great design tool: browsershots.org Starting Up: The Logo Quotes Of The Day: Hedge Fund Interview TSOT Ruby / Rails Presentation Night - Part 1 Moneyworks: Accounting Software for Canadians on OS X Starting Up: The Name Nice logo, but why is your site so bland? Welcome to shindigital.com