Naming a company is difficult - especially on the web. These days you need to find a name that expresses your identity correctly and is somewhere in between trendy and timeless, but which can be readily translated into a web domain. Since it's easy to start a company these days, and even easier to claim a web domain, the good names have mostly been taken.

People often wonder why all the new web companies have strange spellings or nonsense names ('flickr', 'digg', 'reddit') - that's because essentially all of the common words in most world languages have already been claimed, either by real companies or by domain squatters hoping to score another 'sex.com' or 'business.com' windfall.

My other website is andrewburke.ca - and although I'm a proud Canadian I have to confess that most people out there - even in Canada - don't get the '.ca' suffix. I've lost a lot of important email because people addressed it to 'mail@andrewburke.com'. This new venture was going to have to have a '.com' name. While you can call your company something long and specific ("Shindig Inc." seems to be a chocolate company in Richmond Hill - but I can call my venture "Shindig Digital Constructions Inc." without causing any confusion or legal problems), domain names need to be short and memorable. www.shindigitaldigitalconstructionsinc.com wasn't going to cut it.

So my partner (life partner, not business partner) and I spent several weekends in front of our computers with four browser windows next to each other: one to Google to see if a name was already being used for a company, one to godaddy.com to see if a domain was already taken, one to thesaurus.com, and a last one for general browsing and wikipedia reference. We also sent lists of likely names around to friends and colleagues to see what they thought. My original thought was "Semios Software" but that's used all over the place and it didn't seem to leave much of an impression with people.

We tried literature references ("Penseroso" - taken and people didn't like it anyhow), musical references ("Sarabande" - way taken by lots of people), clever word combinations (mostly taken), obscure characters or terms from favourite films and books ("borogrove" was a finalist - a misspelling of 'borogove' from Jabberwocky - the actual name was of course taken), computer terms, ancient Greeks and Romans (no one was likely to be able to spell Philopoemen or Cincinnatus), and many more things.

At one point my partner looked up a list of colour names - and the only one that she found that was not taken was "Papaya Whip". This is about the time that she almost gave up in despair.

My despair kicked in when I thought I'd be clever and use an obscure reference from Lycidas, a John Milton poem I memorized at Oberlin. It ends with "At last he rose and twitched his mantle blue / Tomorrow to fresh woods and pastures new" - www.bluemantle.com is the very nice looking site of a British design firm.

Most names seemed to be taken by either domain squatters, design firms, or technology / research ventures.

"shindigital" was Shannon's idea. "Shindig" was obviously taken, but not "shindigital.com". The by-line on my personal web site and cards for my freelance work has been "digital constructions since 1994" - so this let me keep that language a bit. It also implied something fun and a bit social - which was important for the kind of image I wanted to portray. It didn't hurt that "Shindig" was one of the more fun episodes of Joss Whedon's Firefly show, and a musical variety show from the mid-60s.

We then rushed to get the domain registered as soon as possible - lest some design firm take it at the last minute.

When it came time to actually register the company name, my lawyers were a little surprised about how laid-back I seemed to be. Frankly, after weeks of hunting for a valid web domain name, the actual legal company name was easy.

Turns out someone else also used "Shindigital" - but as their company name: "Shindigital Pictures". Not surprisingly they're also Firefly fans, and are making their own episodes of the show. They didn't get the domain name, though!

... and Shindig itself is also an Apache project implementing Google's Open Social API. It, however, started in November - and I registered the domain and the company a few months before.

The name "Shindig" has turned out to be great. It's fun, short, and has a relatively easy domain name with a '.com' at the end. The feedback from people has been great. It's also highly evocative, which has helped in designing logos and such - but that's for another post.

For your further amusement, here's a picture of my name search notes. Extra points if you can find the Swahili words, as well as a jot-note I made about getting extra RAM for my ThinkPad X30. Hey look - http://www.pc133sdram.com/ is already taken! Note the nice clean desk, too. 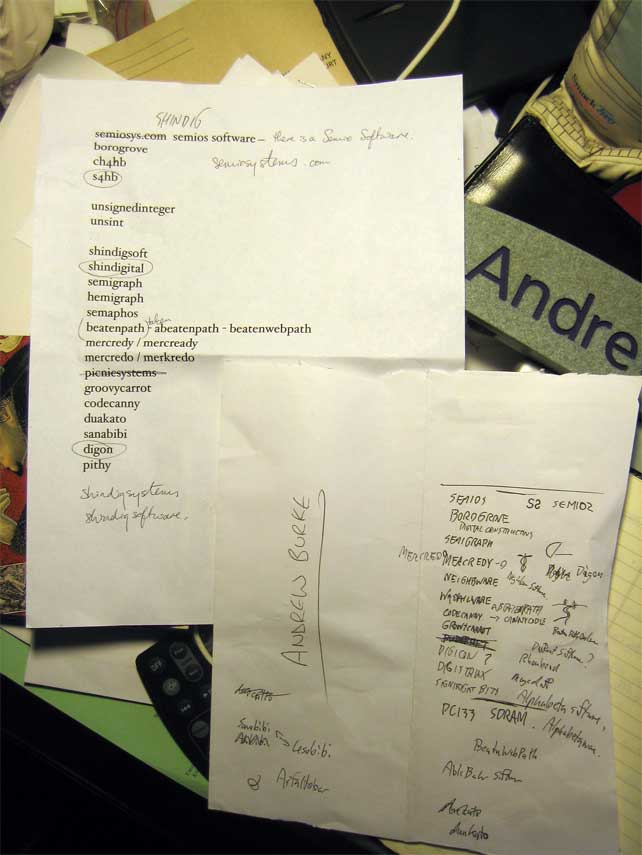 Previous:
Nice logo, but why is your site so bland?
Jan 10, 2008 23:12
Next:
Moneyworks: Accounting Software for Canadians on OS X
Jan 16, 2008 11:51
Share
Twitter Facebook
Other Blog Posts
My Expanded Twitter Thread about BurgerWeek 2021 This Is Nowhere: The Server Side Building a React Native App Without Tears - Part 3 Building a React Native App Without Tears - Part 2 Building a React Native App Without Tears (Mostly) This Is Nowhere: The Memento Edition This Is Nowhere: Aspects of Accessibility Presentations About NowHere This Is Nowhere: Head-First Into React Native This Is Nowhere: Bloomsday Halifax This Is Nowhere: Why an HTML/JavaScript Single-Page App With GPS Is A Bad Idea This Is Nowhere: GPS and Wayfinding and More UX This Is Nowhere: The Single-Button UX This Is Nowhere: Don’t Just Stand There! This Is Nowhere: Finding My Duck Finding Burgers Fast: My DIY Halifax Burger Week Site "This is Nowhere" at PodCamp Halifax 2018 The Diary Diaries: Fixing Remembary's Facebook Connection Special Leap Day Edition of "Some Weird Things About Time" What's Up With Remembary Can't get pg_dump To Work Now That Heroku Has Upgraded Postgresql to 9.4? The Best Thing I Ever Did To Promote My App If You Build It, They WON'T Come #deployaday, My Big Hairy Plan for 2015 Extracting Plain Text from an NSAttributedString My Year of "Hits" Part 2: Remembary Rolling My Year of "Hits" Part 1: Remembary Rises (and Stumbles) Handy Little Test Method to Check for Translations in Rails Apps My Suddenly Slow-Waking MacBook Air Indie App PR: Keeping Control of Your Tone A Quick Note on 'clone' in Rails 3.2 My eBook Apps 2: iOS, JavaScript, and Ruby My eBook Apps 1: Introduction Quick Tip: No Sound on Mountain Lion My Upcoming Talk at PodcampHFX 2012: My Year of "Hits" starshipsstarthere.ca: Building at the Speed of Funny Screencast Tips Remembary's Cool New Picture Support Indie App PR 2: Keeping On Top Of User Feedback Indie App PR 1: How to Handle an App Disaster Giles Bowkett Diary Project 2 Remembary Video Congratulations! Welcome to Your Nightmare! How My iPad App Remembary Took Off Why You Should Have an App in the App Store (Even If You Probably Won't Make Any Money) PodCampHFX Remembary Presentation - Part 3 How I Used MailChimp Autoresponders to Promote Remembary PodCampHFX Remembary Presentation Part 2 PodCampHFX Remembary Presentation Part 1 Why AdWords Ads Don't Work for iPad Apps Remembary is Sponsoring PodcampHFX Why Can't I Resize my Views in Interface Builder? Momento and Remembary Concerning Remembary iPad-Friendly eBooks of Gracian's Art of Worldly Wisdom Project Report: PTOS2 A Quick Note on Encryption We're all LUsers Thoughts on HAML Friday Afternoon Hack - Getting Beyond the Basics Halifax Friday Hack and Back to Basics Quote from Wil Shipley FutureRuby Make Web Not War Busy Week I: Toronto Ruby Job Fair Employment.nil - the Toronto Ruby Job Fair Code Count: Ruby on Rails vs. C#/ASP.NET A Brief Note on Twitter The Hub Halifax and Mobile Tech for Social Change Deep Thoughts on Microsoft From The Accordion Guy The Two Kinds of Defensive Programming Presentation - Fixing Careerious: From C#/.NET to Ruby on Rails Enterprise! Presenting at Ruby on Rails Project Night - May 7th New Name and New Look for Careerious/Clearfit FutureRuby and More From Unspace Health Tips for Programmers This tables meme won't die Careerious - Ruby and Rails vs. C#/.NET Yeah I Use Tables For Layout, So Sue Me The Different Kinds of Done Giles Bowkett's RubyFringe presentation OfficeTime: Great Time-Tracking App for OS X Back With A New Look Non-DRY Feed torontorb Keeping Your Sanity With The Command Design Pattern shindigital Is All Grown Up! (according to the spambots) Startup Stars? I'm so bored! The Magic Words for RMagick Jennifer from Operations You see? Naming is HARD Business Software as Process Documentation Deployment note: 'execve failed' Steve Jobs on Market Research Why Canada Is Better for Entrepreneurs "Program first and blog second" Toronto Tech Collage The MacBook Air Is A Roadster RubyFringe! Quote of the Week: Steve Yegge Starting Up: Cards Great design tool: browsershots.org Starting Up: The Logo Quotes Of The Day: Hedge Fund Interview TSOT Ruby / Rails Presentation Night - Part 1 Moneyworks: Accounting Software for Canadians on OS X Starting Up: The Name Nice logo, but why is your site so bland? Welcome to shindigital.com